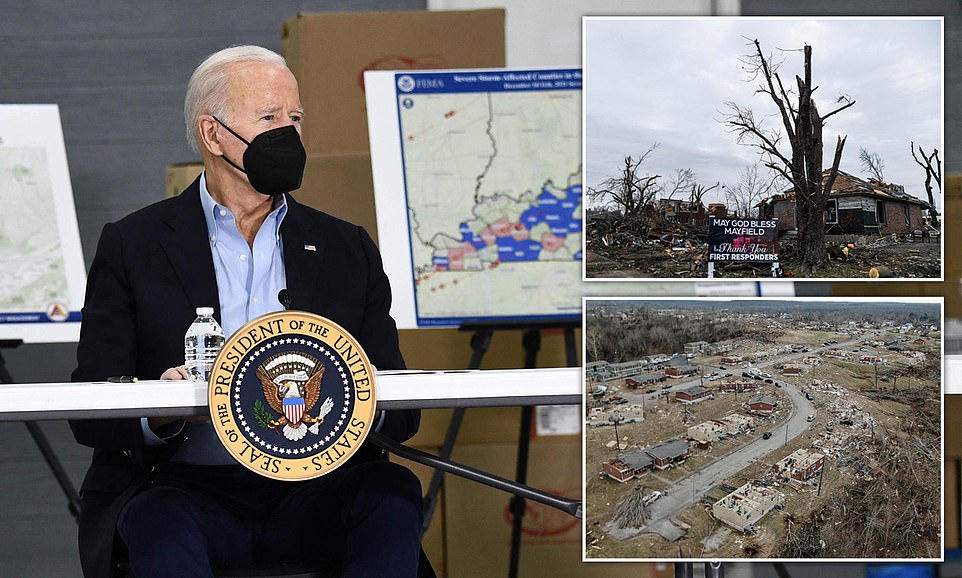 President Biden arrived at the epicenter of Kentucky’s tornado damage on Wednesday to be greeted by jeers of ‘Let’s go Brandon’ before promising to meet the costs of the state’s first 30 days of emergency work. The greeting, which stands in for profane language, was a reminder that this corner of Kentucky is deep red, and voted overwhelmingly for former President Trump in the election last year.

But the president paid no attention to political partisanship as he toured a downtown area reduced to mounds of rubble and piles of logs by tornadoes five days ago. Pictured: President Biden gives a speech in Dawson Springs, Kentucky, after spending time with residents who lost their home.

The death toll in Kentucky stands at 74 – but is expected to rise higher – and another 14 people are reported dead in three other states. Pictured: President Joe Biden hugging a young boy named Dane as he waited for his turn to speak in Dawson Springs, Kentucky,  Wednesday.

‘Back where I’m from, we’re used to hurricanes and floods and high water. But these tornadoes are just something totally different. They devour everything in their path: your homes, your businesses, your houses of worship, dreams or lives,’ Biden observed. Pictured: President Joe Biden speaks to people as he surveys storm damage from tornadoes and extreme weather in Dawson Springs.

Biden was visiting to see the damage for himself and to offer local leaders any help the needed. After touring the neighborhood of Dawson Springs, he said he had agreed to meet the state’s emergency costs and promised the federal government would help it get back on its feet. Pictured: President Joe Biden (left) waves as he stands with Kentucky’s first lady Britainy Beshear (right) during Wednesday’s tour of the destroyed Dawson Springs.

‘I wasn’t sure I had the authority to do this. But i do,’ he said against a backdrop of homes reduced to matchwood. ‘The government’s going to cover 100 percent of the cost of the first 30 days, all the emergency work … the federal government’s going to take care of it.’ Pictured: President Joe Biden speaks with Raylie Hall, 12, as he surveys storm damage from tornadoes and extreme weather in Dawson Springs.

He also spoke of how much harder it was to suffer loss ahead of the holidays, citing the phone call he got from a first responder when his wife had been killed in a car crash. ‘We also need to recognize that people are suffering mentally and emotionally,’ he said. Pictured: President Joe Biden speaks with members of the media as he surveys storm damage from tornadoes and extreme weather in Mayfield.

‘People talk about post-traumatic stress on the battlefield in Afghanistan and Iraq.’ He continued: ‘Well, guess what there’s a lot of post traumatic stress that comes from lying in your house when all of a sudden the roof gets blown off and you wonder whether your kids are around.’ Pictured: Joe Biden surveys damage from the tornadoes in Mayfield, Kentucky.

‘The shock of losing a home or business, the grief of losing someone. It’s happening just before the holiday season. We’re going to make sure you have all the help you need,’ the president said. ‘We’re not going to leave I promise you. The federal government is going to be here until this gets rebuilt,’ he said after standing head bowed in prayer with three of his guides (pictured).

Before delivering his remarks, he met families up and down Alexander Road, who had lost everything. Doll’s legs could be seen sticking out from beneath the remains of trees; a blanket was stuck 40ft up in a tree stripped of its branches; and thick electricity cables lay on the ground, coiled in the rubble. Pictured: Biden and Mayorkas attend a meeting with local leaders and members of Kentucky Emergency Management for a briefing about storm damage from the tornadoes and extreme weather, in Mayfield, Kentucky.

‘To all the families – keep the faith. We’re going to get this done,’ he said. He said he was amazed at the way the community had come together and said this kind of tragedy can either bring people together or knock them apart. ‘There’s no red tornadoes and blue tornadoes,’ he told local officials during a briefing in Mayfield, epicenter of the disaster. Pictured: An aerial view of a destroyed businesses in Mayfield, Kentucky, on Wednesday.

For the fifth time since taking office, he was delivering messages of condolence and promises of aid to an area ravaged by natural disaster. ‘I have not seen this much damage from a tornado,’ he said after flying over the affected area. Thousands of people remain without power, heat or water five days after more than 30 tornadoes ripped through four states. Pictured: A drone picture of the Mayfield Consumer Products candle factory in the aftermath of the tornado.

Here, President Biden is seen speaking to reporters before boarding Marine One en route to Kentucky. The goal of the trip was to survey damage and ensure the federal government was doing everything possible to help, White House deputy press secretary Karine Jean-Pierre told reporters on the flight from Washington. Traveling with the president were Secretary of Homeland Security Alejandro Mayorkas, FEMA Administrator Deanne Criswell and GOP Kentucky Rep. James Comer, among other White House officials.

Taking questions from reporters ahead of departure, Biden said there had been ‘some’ progress on his Build Back Better bill after his conversation with key Democratic centrist Sen. Joe Manchin, but it was ‘going to be close’ as to whether Democrats could seal the deal before the end of the year.

Matt Robertson helps search for possessions around his father’s home after it was destroyed during Friday’s tornado on December 14, 2021, in Dawson Springs, Kentucky. Multiple tornadoes touched down in several Midwest states late Friday killing at least 88 people across the region.

Governor Andy Beshear of Kentucky said the complete scale of destruction won’t be known for days as some homes are impossible to get to. On the eve of his trip, Kentucky Governor Beshear offered a sad update on the dead, which included a dozen children, the youngest of whom was a 2-month-old infant. He said more than 100 people were still missing and that he expected the death toll to rise.

President Biden walked past traffic signals twisted by the strength of the wind and a battered Ford Fusion with its windows blown out. An office building had lost one side, leaving smashed desk and monitors where staff had once sat. Pictured: Biden speaks with a local child on a cell phone as he tours storm damage in Mayfield, Kentucky.

After the briefing, Biden toured storm-ravaged Mayfield and promised help to the people who stood amid the rubble where downtown used to be.

Biden, wearing a Beau Biden Foundation cap, said he took hope from the stories he heard from locals. ‘We got 99 billion of damage just this year, just this year because of weather and climate change. We’re going to get it done. I’m impressed by the way everyone is working together, I really mean it,’ he continued. ‘Amazing stories I’ve heard, all personal stories – not stories about I lost or I did… about other people and helping other people.’ Pictured: Biden tours Mayfield, Kentucky, on December 15, 2021.

Kentucky Governor Andy Beshear said more than 100 people were still missing and that he expected the death toll to rise after dozens of tornadoes left a path of destruction in their wake over the weekend.

Biden is jeered as he surveys tornado damage in Kentucky, thousands still without power