The SWAMPS-Élysées! Paris is flooded by the Seine and German shipping is stalled by high water levels under bridges as rivers across Europe burst their banks after torrential downpours

By Ross Ibbetson For Mailonline and Ap

The streets of Paris were awash with the Seine today after deluges across Europe saw rivers burst their banks.

The famous embankments and avenues of the capital were submerged under the river for a fifth day in a row on Saturday as the weather service forecast ‘la inondation’ would last into Monday.

In Germany, shipping traffic was halted on the Rhine as the high water levels meant boats could not pass beneath the bridges.

French Prime Minister Jean Castex pledged support for farmlands and residents whose land has been devastated as southern France was also plagued by swollen waters in the Garonne River between Bordeaux and Toulouse.

He visited the sodden town of Marmande in the region Friday and promised ‘the solidarity of the state for all those who suffered.’ 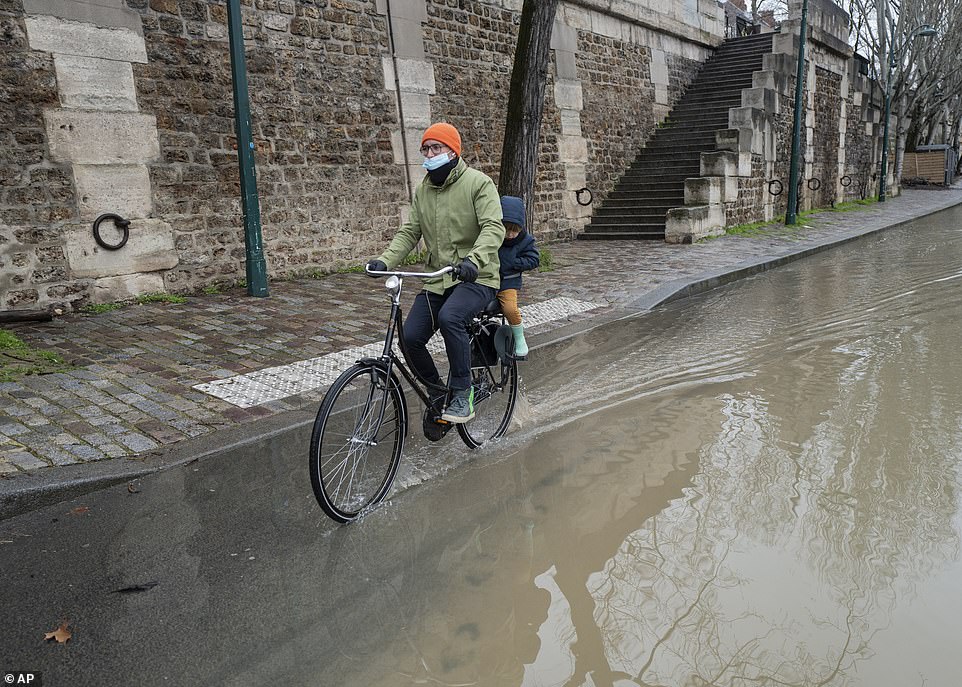 A man rides a bicycle along the flooded roadway on the banks of the river Seine, Paris, France on Saturday. Rivers across France broke their banks this week amid heavy flooding and the national weather service forecast the waters would stay high through the weekend 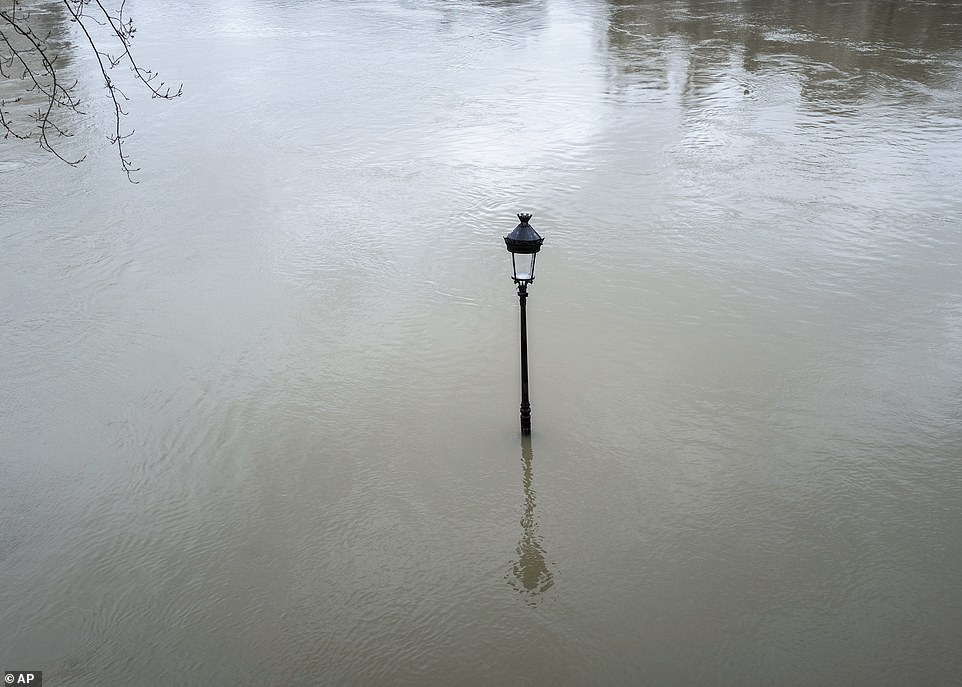 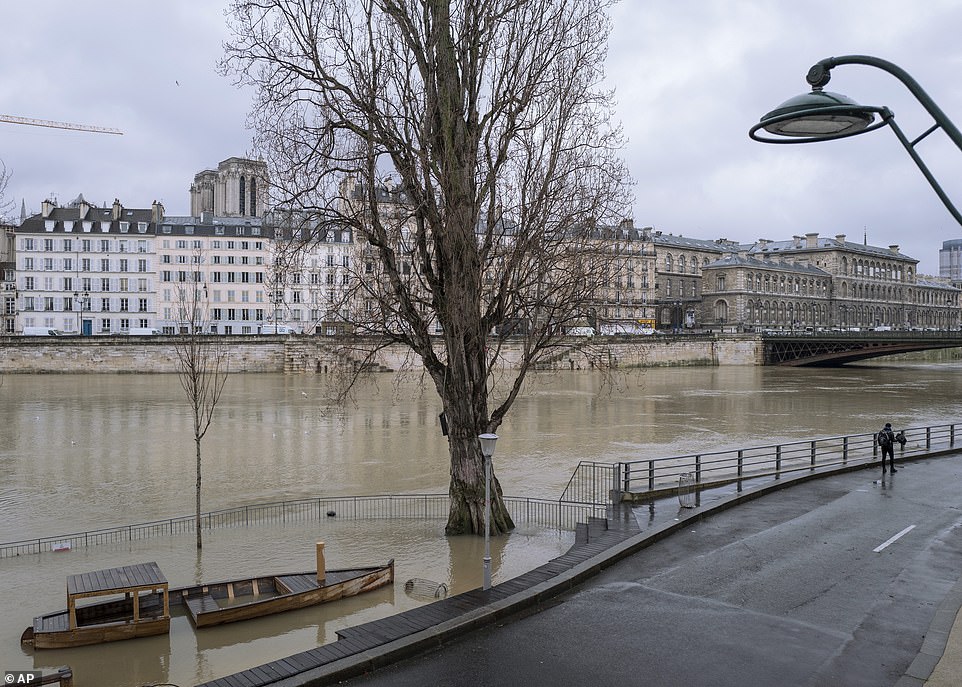 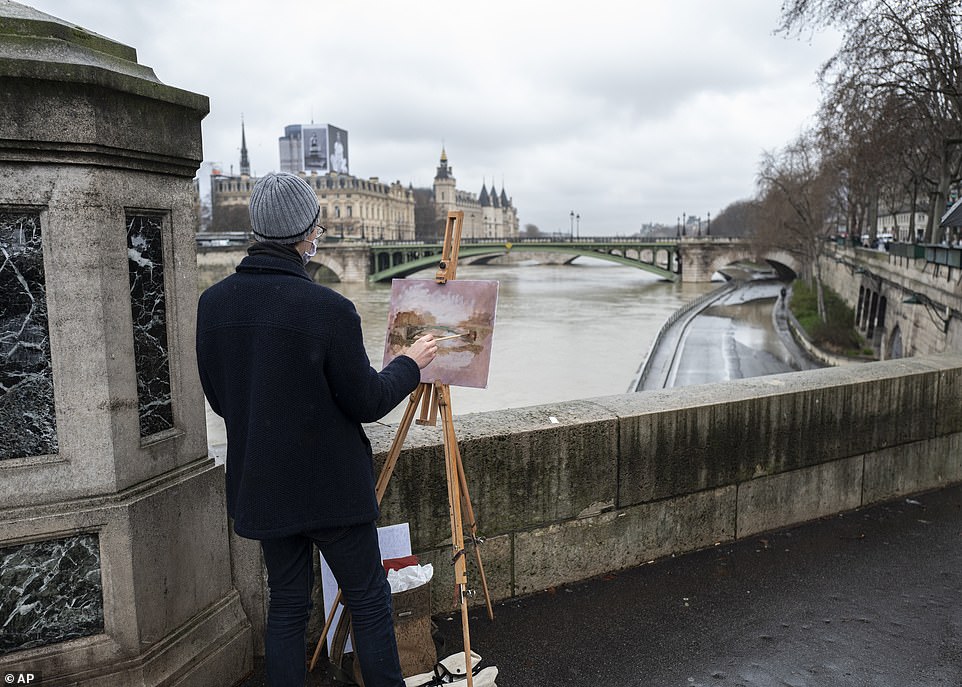 He told reporters that he met with local leaders to discuss reinforcing levees and other broader structural investments ‘linked to these climate phenomena that keep repeating themselves.’

Flooding has also blighted Germany, with rivers buckling under the strain of melting snow, as well as a constant deluge of rain throughout the week.

Residents in the eastern community of Burkhardtsdorf in Saxony, not far from the Czech Republic border, built sandbag barricades outside their homes as the Zwoenitz river that runs through the town overflowed its banks.

In the west, the Rhine’s crest dropped slightly but remained at high levels in Cologne, the dpa news agency reported. 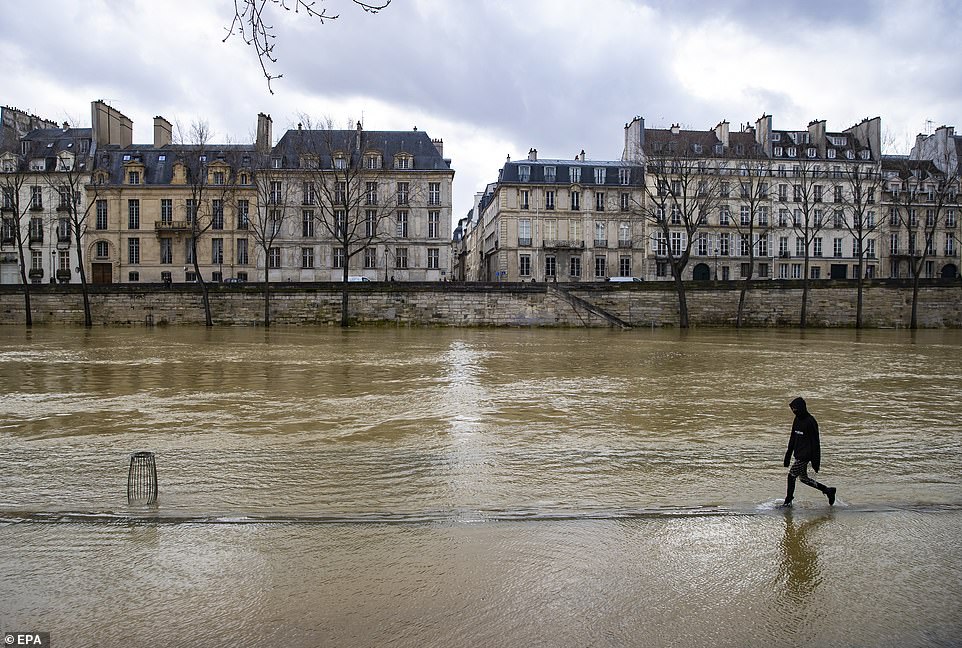 A man wades through floodwater along the swollen banks of the Seine river, submerged in floodwater in Paris on Friday 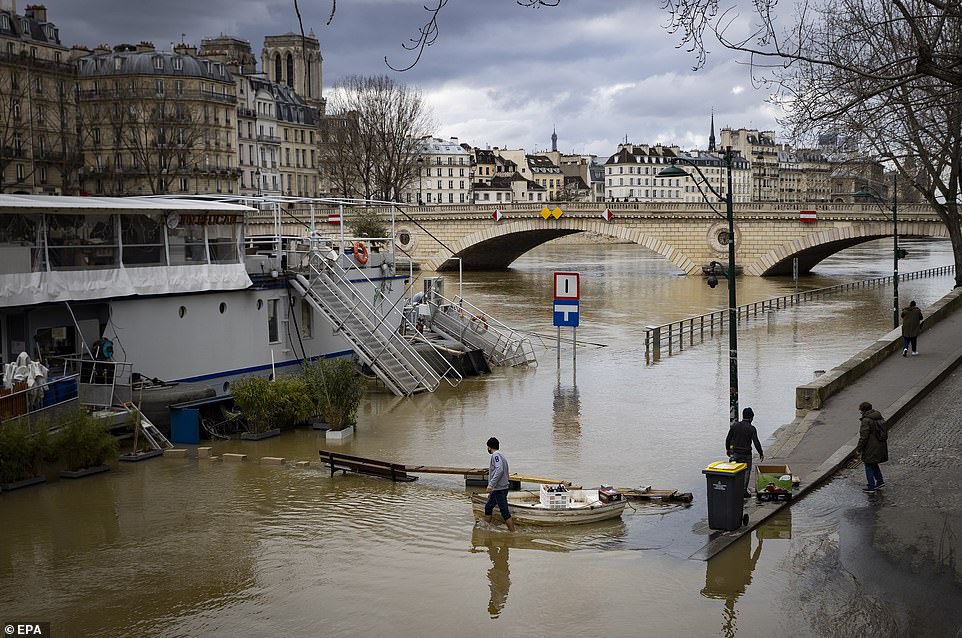 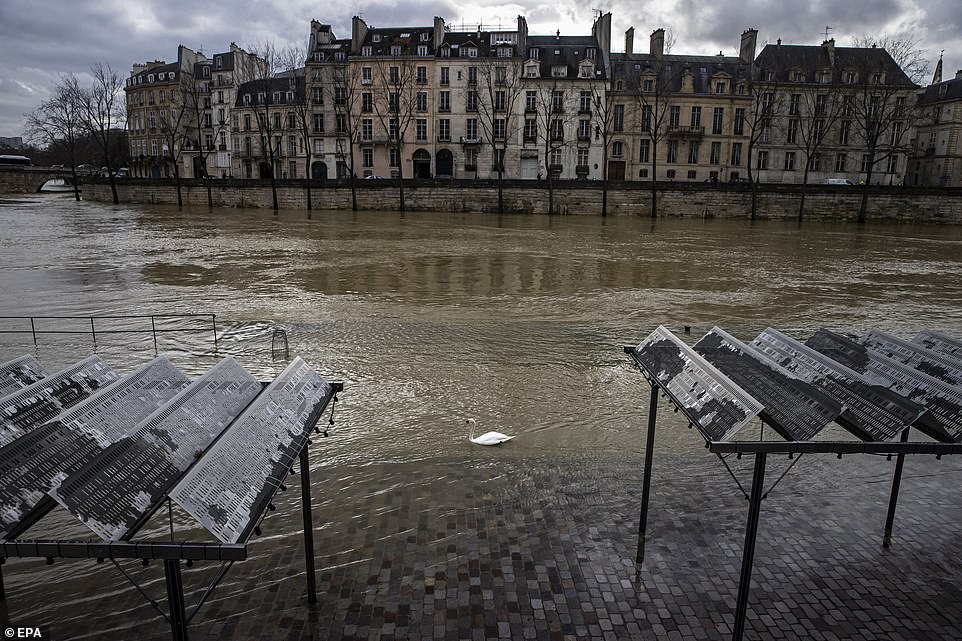 swan swims along the swollen banks of the Seine river, submerged in floodwater in Paris on Friday

Shipping traffic that was halted earlier in the week after it became unsafe for boats to pass beneath bridges and was allowed to resume on Thursday, though authorities warned that levels were expected to increase again before the weekend.

The Rhine rose in other areas north of Cologne, including Duesseldorf, Duisburg, Wesel and Rees.

To the south, officials also reported flooding in Hesse and Rhineland-Palatinate. 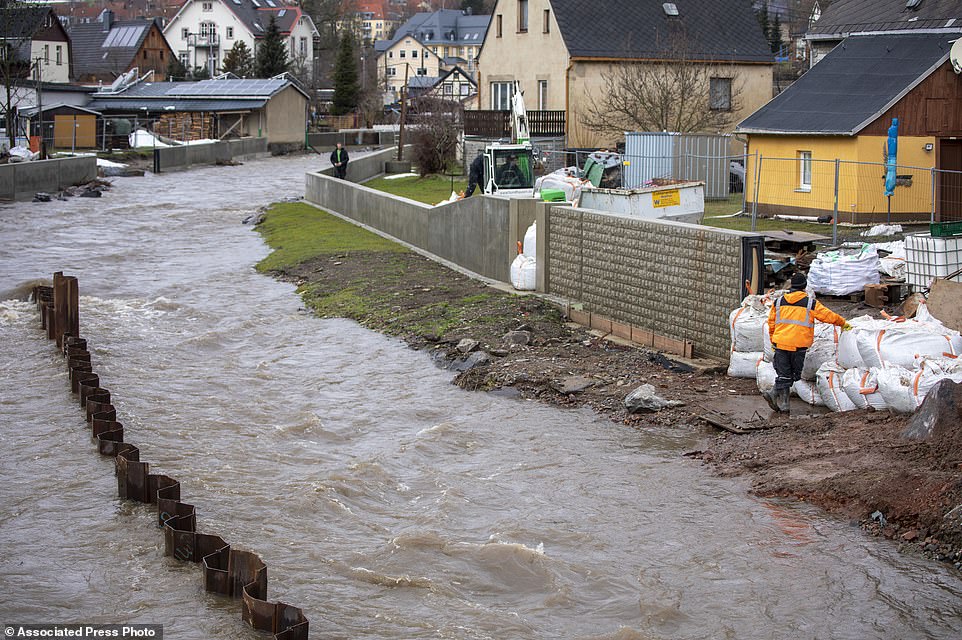 Melting snow and continuous rain have caused the levels of the river Zwoenitz in Burkhardtsdorf, Germany, Thursday 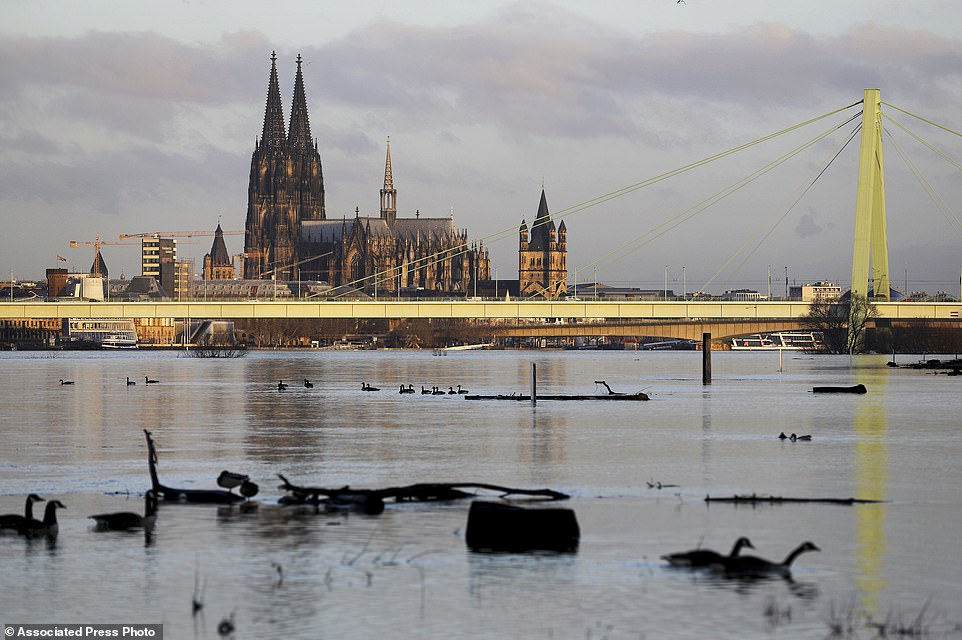 Flotsam floats on the banks of the Rhine in Cologne, Germany, Thursday 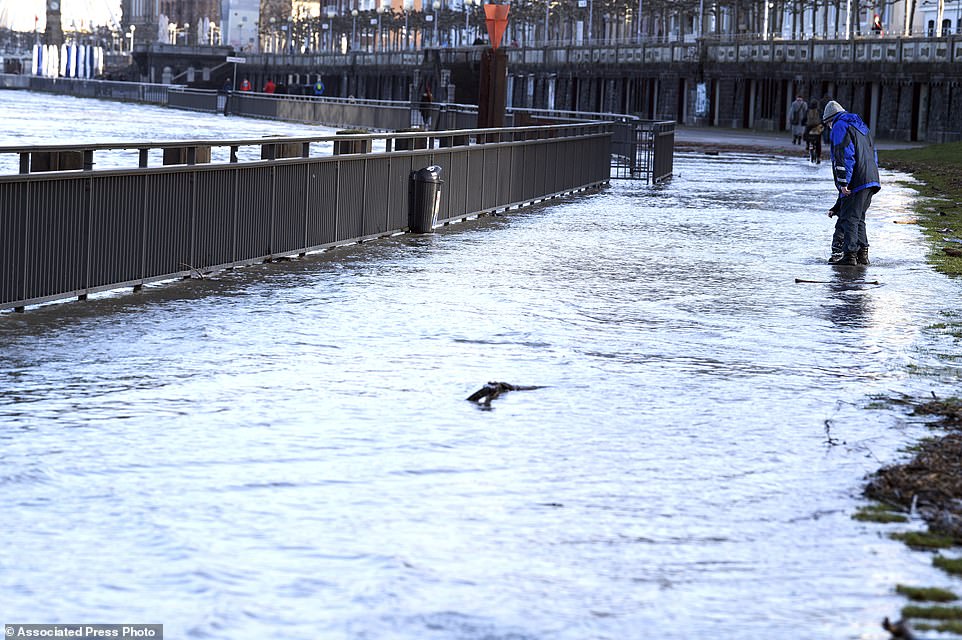 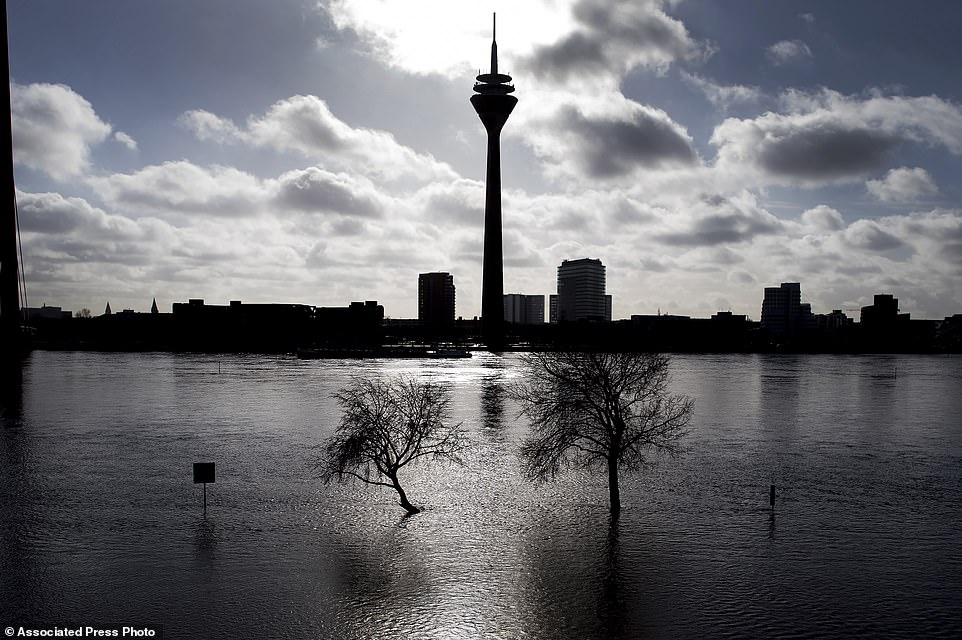 Behind trees, a cargo ship sails on the high water of the Rhine in Duesseldorf, Germany